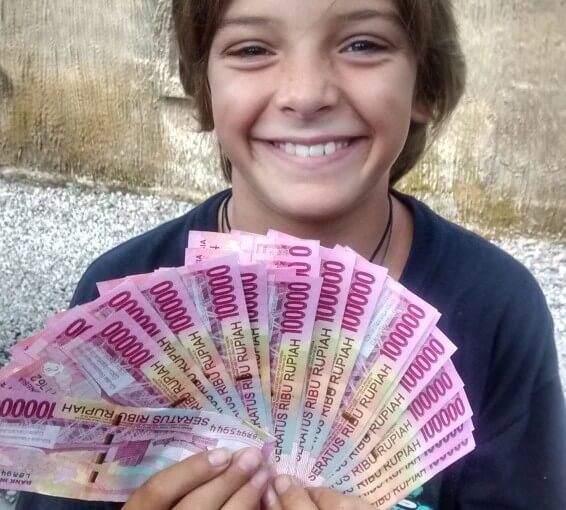 Yesterday I was a millionaire for a moment, then mum paid last weeks accomodation so now im not anymore. Even though im rich in my life already. The cool thing was mums friend saw this photo on her facebook page and made it into something else. I’ll try and post it on here so you can see. Its really cool, I want to learn how to do that.

Anyway, yesterday we got a taxi ride from Ubud down to Caangu beach to visit a friend of mums from Gisborne named Adam. It took an hour driving through all these windy little village roads,and I’m glad mum decided not to ride down on our motorbike because it would have been so hard to find our way and deal with the crazy traffic as well. They don’t really have any road rules here it seems.

When we got to Caangu, which is on the coast, I was amazed at how big the waves were and how open it was. I mean like barrels were everywhere! It took us a while to find Adam but when sniffed him out. We were amazed at the awesome cool house he lives in with Anita and her cool kids Sheriff, Sweeny and Cashey. They’ve got 2 dogs, heaps of crazy coloured Japanese fighting fish and one goldfish with a really wierd bubbly head. Their house is so big they can play soccer   in it and they have a pool in their lounge!!!! Its pretty awesome. We all went out for dinner at this restaurant on the beach called Old Man’s where there were heaps of young people and travellers getting bubbly for the night. 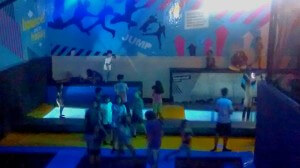 It started at 7:00PM and went until 10:00 and all we did was jump off the walls, bounce into the foam pit and have a great time. It was SO AWESOME that I want to go back next week already. 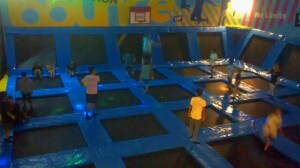 I went in the foam pit and then on the olympic sized trampolines to, but the one that was most fun was the basket ball court because it was all trampolines, on the floor on the walls and every where else.

We played there until mum and Adam came to pick us up and I was so thirsty, (even though i drank 2 bottles of water….mum!) so we went straight home to another big drink and bed at our really nice place called Serenity.

It was such a great night. I’ll post photos when we can upload them.