A couple days ago we went to a really massive waterfall and me and my friend Jayia got to swim underneath it, man was it powerful and windy! 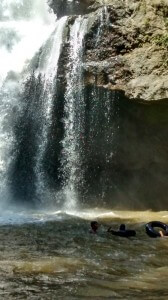 When we went behind the waterfall we got sucked in and pushed to the back of the cave. A guy lent us some rubber tyres so we didn’t drown and pulled us around so we didn’t have to swim so much. Jayia accidently popped the tyre she was on, so we secretly tried to hide it from the guy so he didn’t know. But he did find out. 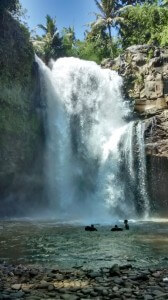 The water falling was so strong it made huge waves, it was like we were in the middle of a huge stormy sea. 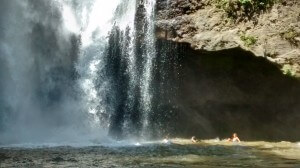 After that, we had lunch and a guy lost his jandle down the river at the same time. When we got back up to the top of the massive stair case Jayia the girl that I met a week ago asked if I wanted to have a sleep over and I said yes and we had a great time together.

WHAT WE DID AT JAYIA’S HOUSE.

1. We got there and made some loom bands.

5. I found the kitten but it was locked in another room of their house.

6. Jayia woke up and we went for a walk into the rice paddies and after that we came home and had breakfast.

7. One of Jayia’s friends came over and we all played all day.

8. We went to a singing circle thing, where the adults sung and we played in the pool.

9. We left and went back to her house.

10. Then we went into town to meet up with mum for dinner. It was great.

Lukoia Coffey swimming, playing with new friends and travelleing the world with my family over and out.