Yesterday we woke up in the morning and stretched, yawned and then packed our bags. We were leaving from Tikal to go to Antigua to hopefully hike up a volcano. There were no buses in the daytime, so we took the night bus for 10 hours to Guatemala city. To get to the night bus, we had to take a mini bus from El Remate to Santa Elena and then wait 8 hours until 10 pm.

While we were waiting, we walked down to the park by a massive lake and on the way we stopped in at a mall and I played some video games in the arcade. Then we walked over the bridge onto an island with a town called Flores. And then I went and looked in some shops and I saw some cool jewelry and an awesome knife.. It was kind of like a small dagger. We walked all the way around the island and it took us about one hour.

We headed back to the bus station and on the way there, we saw a little taco shop and Dad didn’t think that I would like it, but when he looked over at my plate, it was all gone. They were the best tacos I’ve had in a long time.

We caught the big bus at 10 pm to Guatemala city, and on the way all we did was ….ummmmmm…. Not sleep…and be uncomfortable.. This was a luxury bus and it was so bad.

When we got there at 6 am this morning, we caught a mini bus to Antigua.. It took us 1 hour. When we got here we saw the amazing view of the volcanic volcano of volcanoes…. And then we asked how much it would be to hike up one and see the lava and they said 287 New Zealand dollars.. And they also said in a whisper…” Its’ not been working that properly lately” . So, we decided not to climb ,sadly….

So…we’ve just been chillaxing this morning in the local markets. 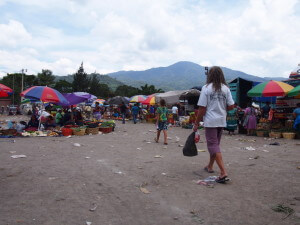